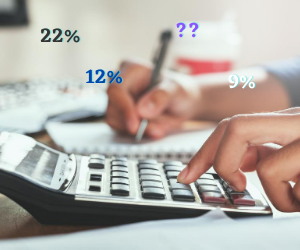 Have you filed a joint return with your spouse where you both work and receive W-2s and, when the return is filed, you owe taxes? You ask, “Why would we owe when our employers are both withholding taxes?”

It is not uncommon and happens often in this situation. The biggest reason is the way payroll tax tables calculate withholdings when both spouses are claiming a married filing joint tax status with the employer. When your employer calculates the amount of federal income taxes to withhold, it annualizes the gross pay you are receiving and calculates the withholding based on that income. The payroll tax tables don’t know there is other income in the household (such as a spouse’s wages) so it withholds based on simple tax tables.

For example, both spouses earn $60,000. The payroll tax tables will calculate federal tax withholdings with the highest tax bracket in that calculation at 12%. The average rate may be 9%. However, when the income on the tax return is combined, a portion of that taxable income will be taxed at 22% leaving the shortfall you see as a balance owed on your tax return.

Many clients will ask, “should we file using a Married Filing Separate status?” In a vast majority of the cases, the answer is no. Because the way the tax tables differ for those in the MFS filing status versus filing jointly, the amount of tax owed will be the same or more. There is rarely a case where filing separately results in lower taxes; most of the time you pay less in tax using a married filing jointly status on your return.

How can you avoid this? The best thing is to complete new Forms W-4. The new forms introduced in 2019 include provisions for the situation where your spouse is also earning wages. This works best when both spouses earn similar wages. The other thing you can do is file a new W-4 and ask the employer to withhold additional taxes each pay period. You could take the balance owed on your return, divide it by the number of pay periods you have in a year and have that amount be withheld as extra withholding on your Form W-4.

You could also make estimated tax payments each quarter but that is more of a hassle than most people want to deal with.

There are many other factors that come into play when calculating the proper withholding or estimated taxes. These factors include income from partnerships or corporations, investment income, rental income, child and educational tax credits, etc. We can help calculate the correct withholding if you want to avoid tax bills when your return is filed each year.

We are a Boulder, CO based CPA firm specializing in business tax preparation, tax planning, divorce tax and financial planning, QuickBooks, and bookkeeping for small businesses and individuals throughout the United States.